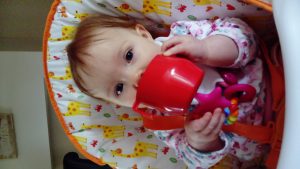 pen cup. Thank you for sharing.

We had begun the weaning process with Phoebe and were finding no success whatsoever in getting her to take a bottle. She is now 7 months and has been exclusively breastfed from birth.
We sought advice from experts and they told us to just persevere and also suggested we try other bottles. Despite lots of time and money invested Phoebe still point blank refused to take milk from any bottle.
As I am under pressure to return to work I was in despair.
One day I was having a discussion with my mum about it and she suggested teething might have been part of the problem. She said she had sworn by Bickiepegs when I was little and she would get Phoebe some.
When they arrived, I read the leaflet inside the box of Bickiepegs and saw the Doidy Cup. When I read up about them it made logical sense that they would be easier to wean a baby with and they were a tried and tested, more traditional way to try, so I purchased one from John Lewis.
We put a small amount of formula into it and lo and behold Phoebe drank from it like a natural. We’ve been building on this ever since and I messaged to ask for advice as it can get a little messy as far as dribbling milk is concerned. I was given some helpful tips via message and we are going to try them out.
Had I known about the Doidy Cup from the beginning I would not have spent all the time and money on the bottles. The cup is simple and easy to use. They definitely seem much easier for a breastfed baby to drink from and I will be recommending it to all my fellow breastfeeding mums. The added extra is that they remove the need to transition from bottle to cup later on. Thanks, Doidy Cup!

What are you looking for?

This website uses cookies to improve your experience while you navigate through the website. Out of these cookies, the cookies that are categorized as necessary are stored on your browser as they are essential for the working of basic functionalities of the website. We also use third-party cookies that help us analyze and understand how you use this website. These cookies will be stored in your browser only with your consent. You also have the option to opt-out of these cookies. But opting out of some of these cookies may have an effect on your browsing experience.
Necessary Always Enabled
Necessary cookies are absolutely essential for the website to function properly. This category only includes cookies that ensures basic functionalities and security features of the website. These cookies do not store any personal information.
Non-necessary
Any cookies that may not be particularly necessary for the website to function and is used specifically to collect user personal data via analytics, ads, other embedded contents are termed as non-necessary cookies. It is mandatory to procure user consent prior to running these cookies on your website.
SAVE & ACCEPT